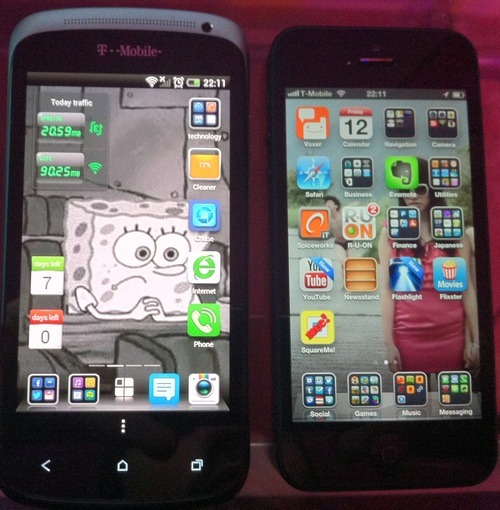 A bunch of people have asked me why I switched to the iPhone 5.  Short answer: I wanted to.  I like Android.  I like IOS.  Apple is a huge dick for what the do to prevent unlocking and 3rd party modifications, both on their phones and on computers.  But the phone just works.  You can load an iPhone up with a bunch of crap and the keyboard doesn’t lag.  Camera’s are about the same at this point.  More and more Android phones are coming with fixed internal memory and non removable batteries.  These were complaints about the iPhones early on too.  All I want on a mobile phone is a decent battery life and good camera which is available for either device.

Because I’ve been multiplatform for years, Windows, Mac & Linux, switching between IOS and Android has always been easy.  My phone history since the release of smart phones has been flip flopping every few years.  I had the first iPhone and the first Android phone and even back then I really didn’t have a preference except for I had a 16 gig phone back in 2006.

Truthfully the apps are about the same.  I could get by with just 5 apps:  Voxer, Spotify, Facebook, Spiceworks and Evernote.